Ok, I bought this film, but I haven’t seen it yet 🙂

Casablanca is a huge place, and very industrious.   Its night and day compared to Tangier, – like Jerusalem and Tel Aviv or London and Birmingham.

This place has 3.3 million people, its the 5th largest city in Africa.

Often this place is simply known by the locals as ‘Casa’

I only spent two days there, it looks pretty modern, more like a large French city.   Perhaps a little cruelly, the guide book I had tells people its not worth visiting.   I did get to see a few surprises though.

Looking closer at some of theses posters, I noticed something that seemed more common as getting further down away from Europe;

These symbols show one of the Berber languages, that’s native to Morocco.  Actually theres at least 3 of these, and more types of this in the other north African nations.

Apparently, only 10% of Moroccans are pure Arabs, most of the people are ethnically Berbers or a mix of Berber and Arab. 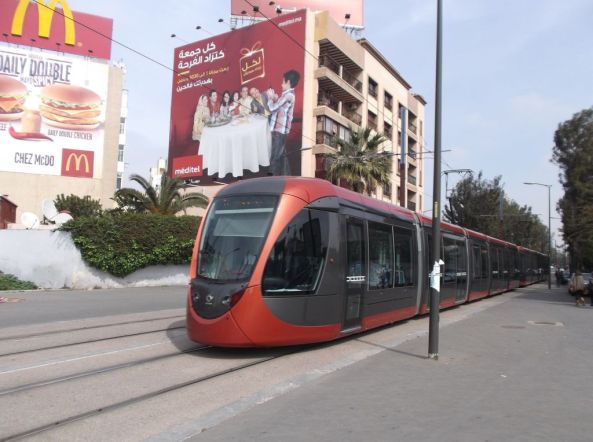 The city centre looks quite fresh and modern, and this lightrail tram looks really similar to the new one in Jerusalem.

Previous 9. Getting the train to Casablanca

Next. 11. The Grande Mosque