Got a message today to report the sad passing of Lance Lambert, a British man who was a well known author on theology and Israel in prophecy.   The interesting thing was I was at my parents house last week and found and old book of his that fell out of a shelf. 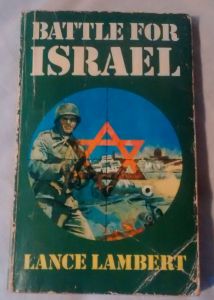 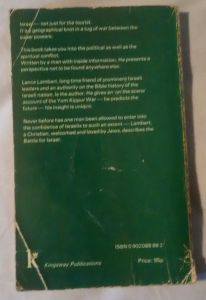 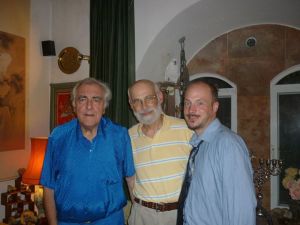 Lance was someone I got know very well personally.   Quite a few young people in their 20s and 30s doing volunteer work for various Christian organisations got to have bible study or get-togethers at his house.   Not only was Lance a worldwide renowned speaker and author he was very hospitable, but as a single man who never married who had a few health problems, he always had people helping him at his home, cooking, looking after his pets (3 parrots, 2 dogs, 2 cats) and going on tour with him.   Lance was high in demand in churches and Christian events, so would usually go to the US and Canada every summer, to the UK and other parts of Europe but when he was younger would go to China.   He would always have volunteers to help with his travel arrangements and getting him on flights, hence I came good friends with Christians of similar age with folks like Nathan, Josh, Shlomo, Basti, Stephen, Richard and Michael who worked for Lance at different times. 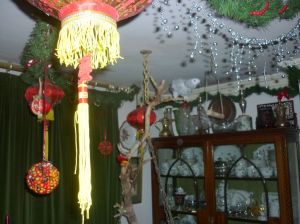 Oddly we had a lot of fellowship when Lance was not there, as he left a budget for his housekeepers to have people over dinner.   We were kept amused by films, card games, Lance’s old and fascinating house full of antiques and of course his animals.    The three parrots he had, one would screech loudly, another would join in, and the other one was friendly and amenable and would talk and mimic the doorbell, telephone and the dogs barking.  Lance’s house was in a historical part of Yemen Moshe, Jerusalem close to the famous King David Hotel and the “Yimca” (Israeli word for the YMCA)   he emigrated in Israel from the UK in 1980, he lost some of his family in the holocaust.

Tuesday would normally be bible study for crowd of us, sometimes just 8, there could be as many as 25.   Lance and his friend Chuck an American Messianic leader would discuss what was currently happening in the news, and talks usually stuck to particular book ie Romans or Revelation.

Since I left Israel in 2013, I knew the Lance’s health was causing him some challenges, but he would always speak at the Feast of Tabernacles event run by the International Christian Embassy Jerusalem, as many Christians would come to this event as a huge praise and worship event.   Lance has given prophecies about world events these been have documented on his web site, some of these have already been realised such as the collapse of the Soviet Union.

I will miss Lance, he is a wonderful British gent who was highly knowledgeable on the bible, gracious, hospitable with a passion to speak about the Lord all over the world.

Some of Lance’s books:-  (many translated to lots of different languages) 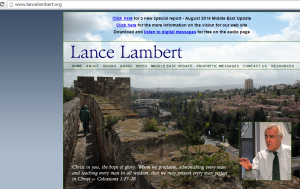 From one of books;

Lance Lambert is one of the most distinguished Bible scholars and speakers in Israel today and has an itinerant teaching ministry worldwide. Born in 1931, Lance grew up in Richmond, Surrey and came to know the Lord at twelve years of age. He entered the school of African and Oriental studies at London University to prepare for work in China. He studied Classical Chinese, Mandarin, Oriental Philosophy and Far Eastern History, but the revolution closed the door to European missionaries and his entry into China. In the early 1950’s Lance served in the Royal Air Force in Egypt and later founded Halford House Christian Fellowship in Richmond, England. Having discovered his Jewish ancestry Lance became an Israeli citizen in 1980 and now has his home next to the Old City of Jerusalem. His father and many members of his family died in the Holocaust. Lance is noted for his eschatological views, which place him in the tradition of Watchman Nee and T. Austin-Sparks. He produces a widely appreciated quarterly audio recording called the Middle East Update, which gives his unique perspective on current events in the Middle East, in the light of God’s Word. He has written numerous books and is presenter of the video production, Jerusalem, the Covenant City.