I took a train from Tarsus to Adana to head home.   This still required (I think with any flight in Turkey) a change at Istanbul. 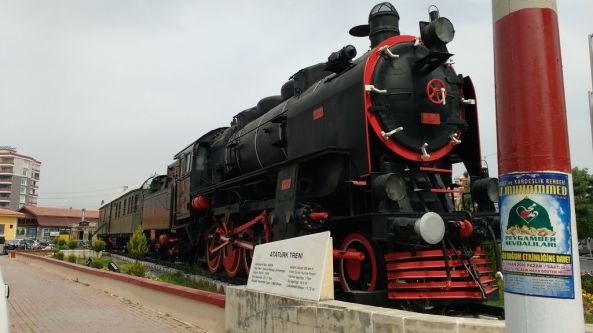 There was this vintage train outside of Tarsus station.   Many years ago, trains went from Israel to Lebanon through Syria into Turkey.

These flags were not out when I went.   The station in Adana is quite a big grand looking place in a modern looking city, it looks a bit like the large Moroccan city of Cassablanca when I went in 2015.

Not much more than 200km from Syria!   If I did my journey the opposite way round, flying to Adana, I know people going off to join ISIS tend to enter Syria or Iraq from south east Turkey, I’m certain I’d get flagged up and put on some kind of list or something.

I didn’t really get a chance to look around Adana.  Its a really big city and this was my final destination before taking a plane home.   I took one stop to buy a small pizza from a bakery.  The two men there were friendly but they didn’t speak English at all.   Neither did my taxi driver I waved down.   Most of the folks I was speaking to required gestures to make myself understood.

Overall
Turkey has been a popular place for holidays, but really Istanbul and Ankara, as its warm and quite cheap.  Turkish people are friendly and hospitable.    Just before I did this trip terrorism reared its ugly head, and I wasn’t swayed as going to smaller towns.   It does seem Turkey has taken a turn for the worse with more unrest, restrictions on the internet and putting journalists in jail.   Would I go again?   if troubles quieten down maybe, if I haven’t lived in the middle east before I would not of been I think.   I am really glad I did this trip when when I did in April 2016.

One comment on “Trip to Turkey 28. Flight home from Adana”