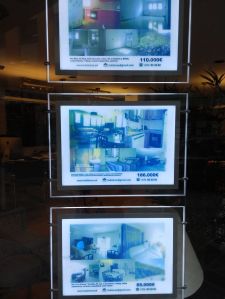 I really want to buy a house, but that’s not going to happen in London.

Here are some flats in Andorra advertised in the main part of the city.  One is 85,000 euros!

Some apartment blocks here are boarded up or new builds that aren’t finished.  My experience living in Israel shows that houses in the middle east are sometimes sold without windows, doors, kitchen and bathroom as sometimes the buyer will finish it off with his choice of design.

This flat needs doing up, as the ad says its ‘in need of modernisation’  Only 49,000.   It’s by the main road and has all those nice views.   The ad was in English, French, Spanish, and German.   But, wait – I’ve illustrated this house not from the blurry picture I took with my phone, but Google Maps, so it has been on the market for four years.  Hmmm.

Spain’s economy is in terrible shape with lots of unemployment but Andorra seems to be a happy contented little nation with 3% unemployment and almost no crime.   To me this looks like a great place to bring up a family in salaries similar to Britain.

Previous 7. No snow, but mountains are still fun

2 comments on “Andorra – 8. An abundance of cosy mountain apartments”