This trip was part of something I did during April of 2018.   I got invited to a wedding in Vienna, Austria.    This couple is friends I know from London, a Christian and a Messianic Jew.

Another friend of mine, his mum works in an airport on the outskirts of London (Standsted) let me know a few industry secrets; a cheaper way to get to Vienna is to fly to Bratislava, the capital of Slovakia and take a bus over.

So this interesting airline ‘hack’ meant I then decided to see a few other places after the wedding.

This journey according to Google is 75km and one hour, but its a little longer than that, as the bus stops at the city centre and the airports of both nations.  It’s widely believed that the two closest captial cities in the Europe are Helsinki, Finland and Tallin, Estonia, but this is more at 90km. (by boat)

Popular German coach company Flixbus did a great deal to get over, although I recommend prebooking on your smart phone as the first bus when I got off the airport was full from prebooked passagers.

Austria is nice, but I’ve already been there before when I was doing some IT work the previous summer, and I love the Ringstrasse and the theatres and concerts there.   My friends who also came to the wedding all went home, so I took a bit more days off to see some of Eastern Europe.

Vienna seems quite multicultural but has preserved its Christian and Jewish history.

Theodor Herzl was the father of modern Zionism.   This word can trigger all kinds of strong emotions among those hostile to Israel and Jewish people.   If you steer clear of rhetoric, Zionism is a framework for Jewish people to stay connected to their heritage when many become secular or intermarry.

Strangely enough Vienna is also the birth place of Adolf Hitler, and Jospeh Stalin lived there as well.

Right, Juden Gaffe is the name of the street from Vienna’s Jewish community.

I saw this Synagogue (which had armed police opposite)   There are many wonderful churches with spectacular architecture as well.   I only had two evenings free to explore Vienna and there was so much more I wanted to see.

My background in living and working in Israel as a Christian made me want to see some of the Jewish history of old European cities.

What do you think we you hear about Vienna, Austria’s capital?  Classical music? a historical place that looks similar to Germany and borrows their language?

Vienna is quite a lot what I expected to be; Old, grand, magnificent, a place to see a live performance of music by the experts, Beethoven, Mozart and Strauss.

Something slightly odd, Austria is land locked and has no coast.  That doesn’t stop Wieners (Vienna people) from sun bathing on this erzats beach on a concrete island in a river, which means they can get tanned like a sausage!

This river is much more famous, the Danube!

This sign reminds you of gateways to other European capital cities, Budapest Hungary and Bratislava Slovakia. 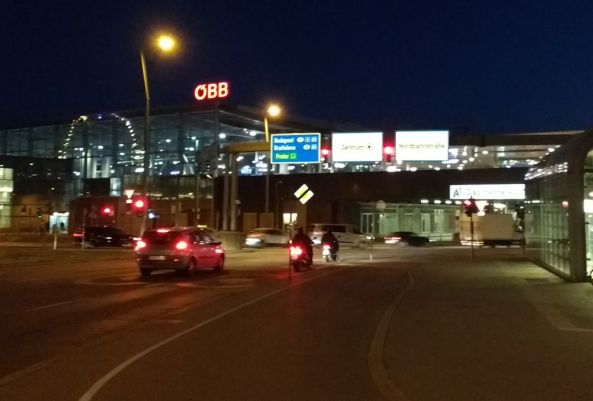