This cave has the lower spaces used for chickens and the upper parts used for doves.

Here is a gift shop, the front part, a normal sort of building, back end is hollowed out rock. 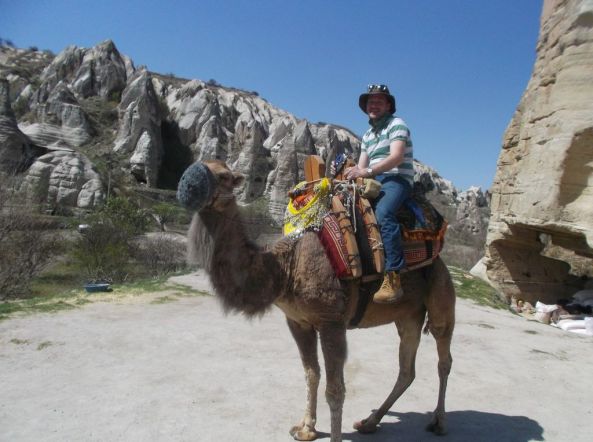 This camel owner does rides outside of Goereme Open Air museum.  The two camels are parked up on the left, camel man’s missus sits in the sofa doing some sewing.  Theres one more camel and their food and water around these two rocks.

This man wasn’t very nice.   I was offered a ride, which after asking ‘how much?’ 3 times he refused to give me a straight answer.   Eventually he said 10 Lira. (£2.50)   After a short 5 minute ride, and some pictures.  I got off and he then decided the pictures and ride were two separate items totaling 60 Lira.   After arguing we agreed 10, he went to 50 then 40.   I thrust him 20 and told him to get lost and walked swiftly on.

This camel is much different beast than ones operated by Israelis and Palestinians.  This one has a cover over his mouth, and his fur a bit matted and unkept (Maybe hes malting?)  This is purely a tourist thing, Turks don’t use these as working animals today.

2 comments on “Trip to Turkey 10. Varying uses of caves and the camel man.”