This well is part of a archeological site containing ruins of a house that’s meant to date from the time of Paul.

Its just 5TL to get into this site.  From the historical signs;

When Paul was born in Tarsus during the reign of Emperor Augustus circa 5-AD, the region of Cilicia whose capital was Tarsus was ruled by the stole philosopher Atendoruis. 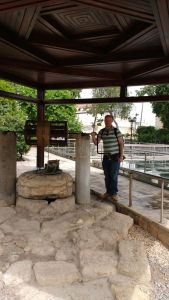 At those times Tarsus was famous for its textile industry. They would produce strong clothes made of goat bred on the Taurus Mountains. Paul has learned to weave there. The people of Tarsus had a cosmopolitan structure. Phoenicians, Persians, Greeks, Jews and people of many nationalities had lived here together. The arrival and settling of Jews of Tarsus occurred during the reign of Antiochus III, in between BC 223-187, during the Seleucids period.

During that time, Christianity was newly spread after the crucifixion of Jesus in Jerusalem and those who were Christians were being tormented. Saint Stephen was stoned to death because he believed in Jesus Christ. The people stoned him laid down their clothes at Paul’s feet. Paul too consented to Stephen’s death. After this event Saul entered house after house of the believers of Christ and oppressed them. He then went to the High Priest and asked for a letter to be sent to the synagogues in Damascus. Saul intended to imprison any who believed in Jesus and bring them to Jerusalem.

Following his baptising, Paul devoted his life to spread Christianity and then he journeyed three times for this mission, and this mission took ten year. In one of his journeys he was arrested and presented himself t a Roman commander with these words: “I am a Jew, from Tarsus in Cillicia, a citizen of no mean city.” Acts 21 : 39. In his journeys, he has survived through many hardships, and traveled to Anatolia, Greece and Rome and spread Christianity. Finally in Rome he was arrested during the reign of Emperor Nero, and was beheaded. His tomb rests in the church built after his name, the Cathedral of Saint Paul.

A well maintained garden, not dissimilar to Jerusalem’s garden tomb, this is a good place to contemplate on how to gospel was spread

Previous 19. Grapes of Tarsus
Next 21. Signs of unrest in Tarsus