I really like this place.   Djerba’s El Griba Synagogue is one of these most unusual and famous synagogues in the world.   It was built at the 19th century, although its not particularly big. 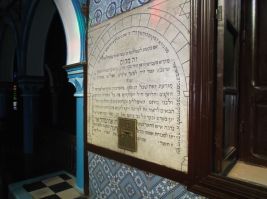 The glass cabinet thing top right appears to have prayer requests similar to the Kotel (Western Wall) in Jerusalem.

The wooden bannister around the synagogue has some flowers attached to it.  The blue and white stripes around the archways.

Things I learned about the Jewish community of Djerba:-

This is truly an amazing looking religious temple with a variety of colours, textures and character like no other.