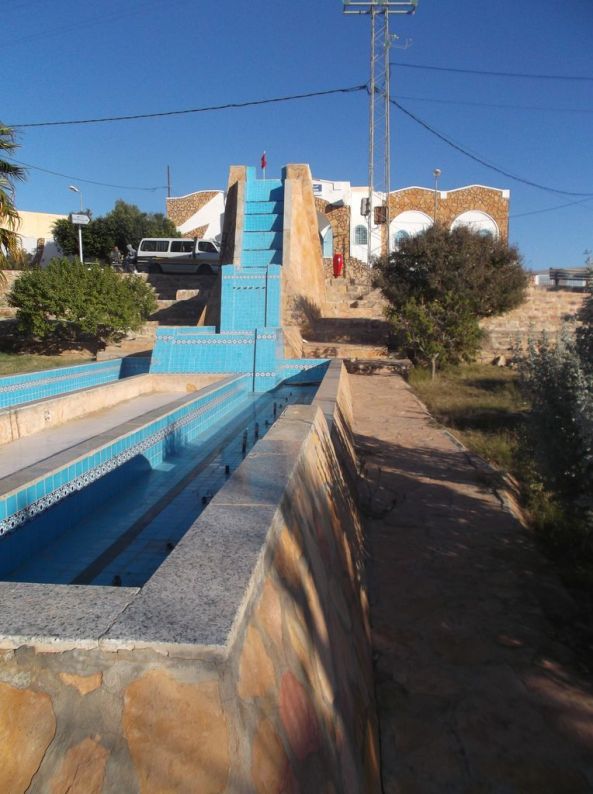 Well, its November, but still looks like it hasn’t rained in a while, this fountain isn’t working.  Also, there are no tourists at the moment at this time of the year, but the climate is pleasant which is why I came now.

When some British tourists were killed British tourists in 2015, European visitors stopped coming to this north African nation.    When terror attacks in Europe started to happen regularly instead, I could justify to myself and my friends and family I’d like to visit here.

Here’s where I made a big mistake.   I ran out of money.   I thought I had another 100 dinars on me.  The Sidi Idris hotel is cash only and doesn’t take cards.   Nor does anyone else in the village.   There are two ATM machines and both of them are out of service.   I went into the one and only bank in the village.  I prayed hard.   One of the locals helped me out.

Here’s one very old and tiny mosque in Matmata, and a more modern one.    The below one has a cemetery with some recent (less than 20 years ago) graves in it.  The big hole looks scary until I looked and there is nothing except garbage in it.

As far as I know, there are no Jews or Christians in here or nearby.

This is from the nearby city of Gabes.   The river is empty.   No rain for a long long time.