There are two Jewish communities of homes in Djerba.   One is Hara Sgira (Large quarter in Arabic)  and Hara Kebira (smaller quarter) I spent a day at the latter.

One of the things I noticed about this community is the kiosks and concrete blocks as a mini-checkpoint in the road to stop traffic in case of any hostility to this area.   The decorative iron grills over the windows are pretty similar to all the apartments I see in Israel.

I saw a police van whilst I was taking photos here.   A policeman got out and approached me and spoke in French, then English.   He asked me what I was doing.   I just told me I want to get some photos of this area to show my Jewish friends at home.   He asked me where I was staying and for my passport.   I had to stop and think about the name of the hotel I was at.   He also asked me what was the drawings in my UK passport, I told him I thought it was Nelson.    After staring at me, for an awkward 7-8 seconds, he shook my hand and said welcome to Tunisia! 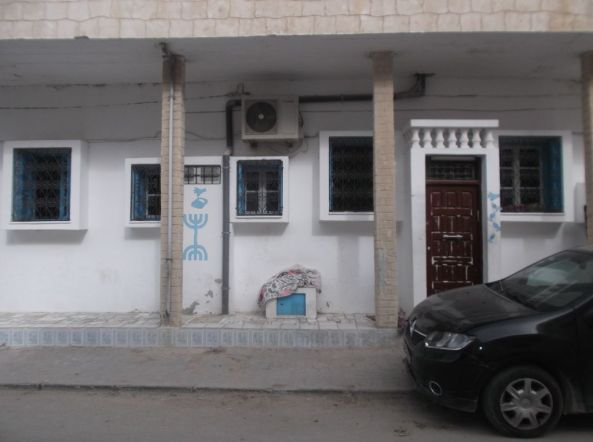 Two things I wanted to understand better.   Normally Amazigh (Berber) people have a three-branch symbol logo who are native to North Africa, but the Jewish Amazigh people have a 5 pointed one, which looks kind of like a Menorah with 2 stems short.  I’ve never seen this in Israel.

These hand symbols I see a lot (like at the jewellery stores) on the blue door are from the “Hamsa”, the hand of Fatima.   I don’t understand why this is both Jewish and Islamic symbolism.   Hamsa is the Arabic word for the number 5, and is also popular is a name for Muslim boys and is part of the teaching of the Koran but not the Tanakh.

These fish symbols show here quite a lot.   I have seen these in Matmata as well despite the town is quite a long way (130km) from the sea.   Here the fish symbols show a hand above on many of these Jewish homes.   Normally fish symbols are often thought to be part of early Christianity and associated with Jesus and his disciples out fishing.

Here are some dried up palm leaves discarded on the road.   This is just a few weeks after the Jewish holiday of the Succot (Feast of Tabernacles) so it would appear they recently cleared down the palm branches and decorations.

Many streets in Djerba are named of previous leaders of Tunisia and Muslim sages I think.   In the Jewish places, streets are named after fruit, vegetables and nuts.  Like Rue Raisin and Rue Figueres.

This door of this home has some Hebrew scratched on symbols on the right-hand section of the right door that says “Rabbi”.

Some of the houses have both a mezuzah (fragment of Jewish Torah scroll, inspired by Deuteronomy 6:9) on the door frame and higher up is a plaque of an Islamic Shahada (the caligraphic passage of a quote from the Koran)    I think maybe after many of the Jews left, these houses are lived in by Muslims but haven’t removed some of the decorations, or, a block of flats with families of different faiths.

Hara Kebira is still growing, and these new houses being built look large and majestic looking. 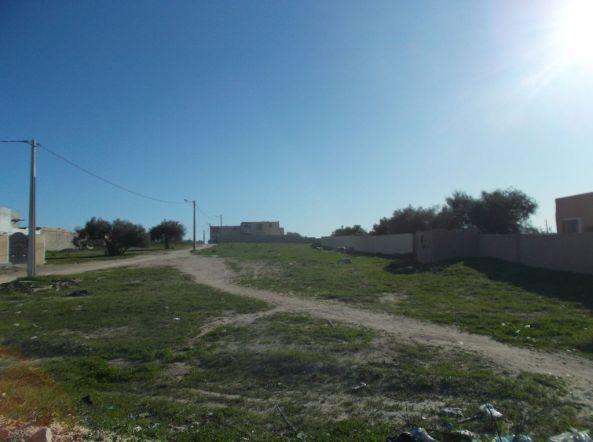 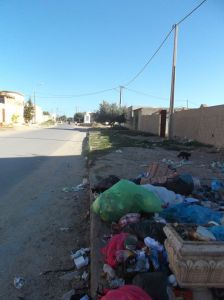 Some of these streets are elegant and neat and some look quite scruffy.   This field here has some sheep grazing and lots of olive trees.   So it appears the Jewish community probably keep their own livestock to ensure kosher slaughter.   This area has lots of plastic bags, a broken TV and other waste lying around which s is a bit of a shame as the olive trees are large and look very old.

Although this is a desert country, the community feels quite different to Israel, mainly because its flat I guess.

Later on, I was reading my bible in my hotel room and munching some dates, for no particular reason I was reading Isaiah 11, which talks about both the prediction of the Messiah and how scattered Jewish people from around the world will head back to Israel.   Including those from islands of the Mediterranean!  Interesting words indeed.   I didn’t get to see it here, but there are Tunisians finding Christ according to some Christian magazines that know North Africa well.