I kind of think that Switzerland, as being a rich, famously neutral and cast iron political stability, is very fair and conservative.

But I think all countries might have one city that’s a bit different, just like Tel Aviv is very different from Jerusalem or other parts of Israel.   This might be Zurich. 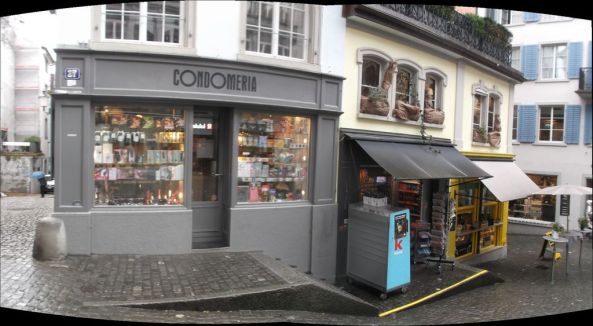 I heard rumours that Switzerland was to legalise Cannabis, but this came close but was overthrown.   I did catch a whiff of it in one street like any other city, but there is a 100 CHF fine if you are caught with a joint, but bizarrely, Switzerland’s police fine you several day’s salary if with more than a handful of soft drugs. Wikipedia.

I don’t do any type of drugs, mostly because I’ve seen weed produce mental health issues on friends I care about.

This boat which was an Asian restaurant was pretty cool to see.    Like the rest of Switzerland, eating out is outrageously expensive here.

Zurich has licenced prostitution I’ve been told, on the outskirts of the city with official

bus shelter type places.   No, I didn’t venture to find out.

The Swiss Jesus impersonator can be booked for your function according to this random poster.

I’ve seen plenty of crazies and cult groups in both London and Israel, but didn’t expect to see it here.

Zurich needs a simple genuine message of the gospel to the public like every other place.

I think this must be the only place in the western world today that still allows a limited amount of indoor smoking, with this specialist lounge.   This lounge in Zurich airport does this.   Could it because Philip Morris European headquarters is in Zurich, no surely not….

When I was in Basel in 2012, my Swiss friend told me there isn’t much crime, but folks don’t like the police as are overly strict, don’t have any sense of humour, and don’t do much PR work to make them approachable like in other countries.